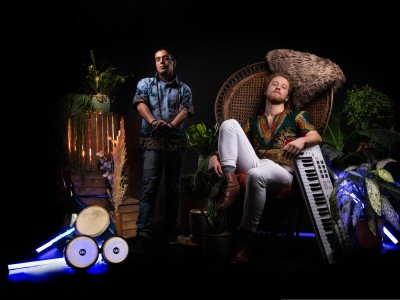 Until 2019, USX and Izoard have taken very different musical paths. USX (Until Six) is an independent, mainly Tech-House oriented DJ/Producer who has been performing and mixing for several years in clubs across the world and who engaged in popular festivals such as the Sziget Festival in Hungary. Augustin Izoard learnt the guitar and the piano at a music academy, studied composition and spezialized in film music, while playing with several live bands.

Last summer, their paths came together to create the joint project "USX & Izoard". With this project they aim at combining their very different musical experience and expertise by bringing a live instrumental dimension (guitar, piano, percussions, electronic pads etc.) to a DJ set. During their short history together they already created two EPs and a single, in which they fuse African and Latin sounds produced in the style of Tech House. One of their songs is titled "Na Pawa" (a title in Lingala), a dedication from USX to his relatives and friends in Congo.

This link with the Congo will continue to be maintained. With their participation at this year's Amani Festival they are entering the next phase of their project, where they want to work with as many local artists as possible to produce an Afro Tech-House EP. We are curious! In the meantime, we can be content with the remixes of tracks like Gorillaz ‘Dirty Harry’, The Doors’ ‘Hello, I love you’ or Moby’s ‘Natural Blues’, which they release every two to three months.