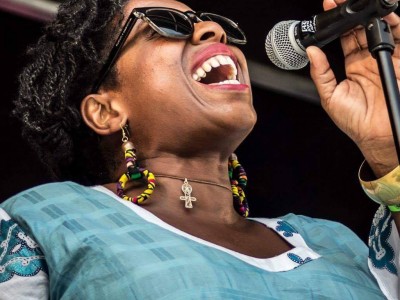 Socially conscious artist with an exceptional voice, Ruth Tafébé is the female figurehead of contemporary Afrobeat.

Ruth was only 15 when she left her native Côte d’Ivoire for the South of France. There, she met her first musical family and shaped her musical identity towards a funk, soul, reggae and jazz infused afrobeat. She then left to try to break into the American market, where she quickly made her mark, playing in New York’s mythical jazz clubs.

In 2007, Ruth Tafebe released her first album Holy Warriors with The Afrorockerz and Maestro Tony Allen, who also features on her second album, Téré Té Ségué (2018). Her recent participation in Lee “Scratch” Perry’s Black Album is yet another testament to her outstanding talent being recognized by masters in the genre. Writer, composer, influenced by Ghanaian and Ivorian music from the 70s, Ruth is bringing her new album to the Amani Festival stage. Her Soul-infused Afrobeat, sung in Maninka and English, has a unique flavor and spice, which only she holds the secret to!

Icons of the South African Scene from the Townships of Cape Town, Voted "Best Reggae Band" Of Southern Africa "at the Mzansi Awards in 2016. It is at the beginning of the 90's, in the dark alleys of Township of "Nyanga", that the "Ghettosound Studio" and its group Azania Band are born.

Faced with the regime of apartheid raging throughout the country, Azania was founded with the firm intention of elevating the messages of the voiceless with only the weapon available to them: Music.

Defenders and flag bearers of a Reggae Roots Consciousness, the group is involved in many social and cultural projects in South African townships.

Emblematic and respected both for their musical mastery and for the battles fought over the past 30 years, Azania Band are also the most in-demand backing band by the international headliners touring in the area. Powerful baselines and hypnotic melodies to Dub and Jazzy accents are their hallmarks.

Today, Azania Band continues their international development and their new album "Burn Down Babylon", is a collection of intensely Roots nuggets to be discovered on the main stage of Amani on Saturday, February 16, 2019.