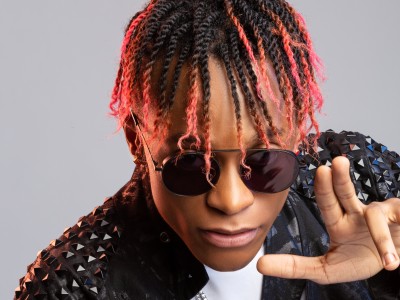 Innocent Didace Balume, affectionately known as "Innos'B" was born on May 5, 1997 in Goma. He spent his entire childhood there surrounded by his family. Already as a child he was bathed in music thanks to his parents.

At the age of six, he joined his brothers in the group Maisha Soul, formerly known as Dji-life. Seven years later, in 2010, it was the revelation for Innoss'B that won the reality TV show "Vodacom Superstar". At only 13 years old, this music contest opened the doors to the USA and the singer AKON, with whom he recorded a song. In 2014, he released his first album entitled Innocent Vol.1, then followed 2 years later with "Turn in the radio" followed by several hits.

This year, it is with the single 'Yo pe' that he floods the dancefloors and makes several generations dance. The recipe is simple, a catchy rhythm, a chorus that we remember associated with a dance choreography easy to remember. And the success is there, allowing him to impose his style: Afro Congo, which combines vibes ranging from Afropop to Rumba through Ndombolo and Afrobeat.

After taking part in the Amani tour in 2016, he returns this year as lead artist. Singer, rapper, dancer, singer-songwriter and also djembe player, there's no doubt that Innoss'B will return to his hometown audiences.