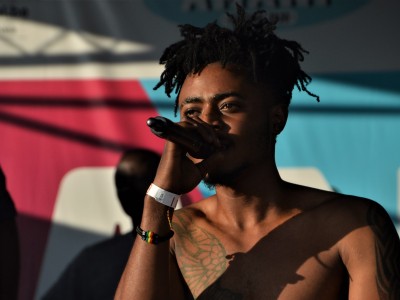 Honoman Kambale, 23 years old, is an musician of our beautiful life in Goma.

We can say that he is persevering since after 5 unsuccessful participations in the festival's eliminatory competitions, he has been selected this year among the 2 artists who will represent Goma.

He made his first steps in music in 2008 in the religious group "Watoto wa Caracciolo".

In 2010, he unfolds his potential as a singer and migrates into the secular music world and joins the group of his neighborhood "Trinita pacificica" and records his very first song "Haki za watoto".

In 2012, Kelvin Batumike decides to take Honoman under his wing and integrates him in the "Come back to School" class entrance ambassador project with UNICEF DRC.

Thanks to this project, he was able to take part in several concerts.

In 2016, Honoman embarked on a solo career. Today he has already released 9 songs including the hit "Sauti ya raiya".

In everyday life, Honoman uses rap as a tool to help children aged 10 to 14 years old who hang out in the streets.