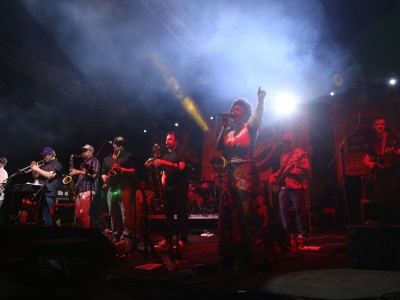 “Euphoria” and “orchestra”, these two elements not only make up the name of this band, but represent their whole vibe. The six guys on the keys, guitar, drums, saxophon, trumpet, bass and vocals are originally from Iowa in the US, and together they create “a band of musical chameleons with the ability to adapt to a wide variety of different styles”, as they write on their website. Containing elements of funk, soul, afrobeat, reggae and dub, their compositions are influenced by music from all over the world.

For all their albums such as “Fire” (2014) or “Let us in” (2012), they collaborated with many different featured guests, building on their reputation as ‘musical chameleons’. Their music is also diverse in the sense that it has firm roots in musical traditions, while being experimental and future-oriented. Besides their own compositions, the latest named “Some things are not known” being released in December 2019, they also play covers of hits like “Kashmir” by Led Zeppelin. They themselves describe their music as “modern funk and roots with vintage soul” and any listener who hears the funky guitar riffs meet crisp brass interjections, driving basslines and soulful voices can easily identify with this description.

Despite their international success, the band sticks to their roots - not only to the musical ones. Every year, they come home to Iowa City for their annual “Home for Holidays” shows, where they collect money for a volunteer-driven community organization that provides immediate and non-judgmental support for individuals facing emotional, food, or financial crisis.

The band’s positivity is also expressed in their funny music videos in which they , for example, move their heads and feet to the music in outdoor bathtubs (Soup, 2009). But the band's figurehead are clearly their live shows, where their energy and rhythm is shown to best advantage. With almost 1,000 shows under their belt, they show no sign of stopping. Because when they perform in front of an audience, this energy is not only felt on stage, but is inevitably transferred to the audience, and will make everyone dance euphorically!